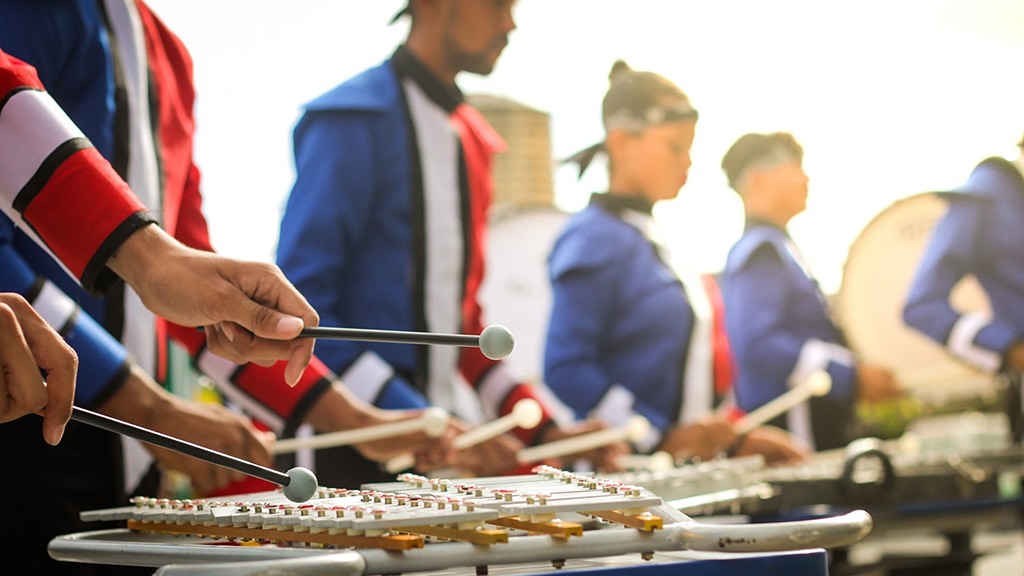 Marching Forth with an Indoor Drumline as a Scrum Team

Summary: Scrum processes and cadences can be applied to real life in surprising ways.

In mid-February, I attended Agile Philly’s Lightning Talks on Agile in Non-IT Areas. Several speakers highlighted their creative use of Agile tools to help manage family life, such as using their kitchen appliances for goal setting. Thanks to this event, I will never look at my refrigerator the same, and I can’t help but now envision my bay window with its 20 perfect panes as one big Kanban board for my busy family of four.

I admit, it’s hard for me to leave work at the office, and the more I learn about Agile and Scrum, the more I can see its use and application in the real world and in my personal life.

For example, the Saturday after that Agile Philly meeting, my son’s indoor drumline attended its first high school competitive show of the season. I was a parent-chaperone and spent the entire day helping and observing the team.

I learned that each performance is judged in five areas:

After all the groups finished performing, the music and visual directors met with the judges for a brief amount of time and solicited direct feedback. There was also almost immediate access to the audio notes that the judges record during the group’s performance. These recordings were played on the bus ride home so that the program directors and all the student performers could hear the raw feedback.

Sitting on the bus as the team listened to the feedback, I made the connection between how his indoor drumline was using a process in rhythm with Scrum to develop and improve their performances. After a long day of chaperoning 22 high school students (many with drumsticks!), I then used the 45-minute bus ride home to flesh out this real-world scenario.

So, here’s what I concluded.

The stakeholders are the audience and the judges. The audience, primarily parents, wants a show that is entertaining, while the judges are looking for a high quality, perfect performance.

This is where my analogy fails. I have not identified one individual as the servant leader Scrum Master. Instead, there is a collective voice when it comes to, for example, stressing the significance of attending all practices.

In my day-long observation of the group, the Indoor Drumline Director serves the role of Product Owner prioritizing which aspects of the judge’s feedback and which details of the performance will get attention during the next Sprint (a.k.a. practice).

I had to think about this one for a while. At first, I thought it included the students, but 22 is too many people for one Development Team. Then, I wondered if there were multiple Scrum teams: one for the pit (students who stay stationary, playing the marimbas, keyboard, and bass guitar) and another for the battery (percussionists moving to a choreographed routine). If the battery was still too many in number, then the sections could be further broken down (snares, cymbals, bass drums). However, Development Teams are meant to be cross-functional, so a Scrum Team would not necessarily be segmented by specialty.

I eventually concluded that the performance is the product that is being developed, and so the Development Team actually consists of the following adults:

A competitive indoor drumline’s sprints are short, just one week in duration.

As soon as one show ends (see Sprint Review), the Product Owner adds items to the product backlog. The Product Owner will ask the Development Team to prioritize what should become part of the week’s Sprint Backlog. The plan, for example, may include changing the score, adjusting the storyline, or working to perfect physical movement.

Since I am not a member of the Indoor Drumline/Scrum Team, I do not have first-hand knowledge about whether or not there is a daily Scrum. I would imagine, at a minimum, that at the start of every practice, the Development Team agrees upon what the focus of their time together will be. As a parent and a trained Professional Scrum Master in real life, I do recognize changes and improvements as the competition season progresses.

Each show is the Sprint Review. The Development Team puts forth the current increment in the form of a performance. The audience and the judges have the opportunity to inspect and provide their feedback – applause, scores, and audio notes – for consideration by the Development Team.

The Sprint Retrospective begins on the bus immediately after a competition ends. The Development Team discusses what went well, what did not go well, and how they might inform the performers to encourage continued improvement. As a parent, I greatly appreciated that before driving back to the school, representatives of the Development Team addressed the students directly and positively. They asked, “Did you have fun? What did you think of your performance? And, do you think there are things we can work on?” Then, they praised the effort they put forth, acknowledged that they did their best they could do on that day, and that over the course of the next week they will have the opportunity to collectively work to make things even better.

I found great irony in my observation of the indoor drumline. Every Scrum discussion I have taken part in always highlights that while the Scrum framework is simple, it is difficult to master. Yet, ironically, here was a novice group unknowingly using key elements of the framework quite effectively. Between their first show and their second show, the group raised their overall score by 8% and they were just 1.7 points shy of first place (versus the 2.45 points the previous week).

Why is this the case? Is there an unusual level of cohesiveness in a drumline? Is it easier for this group to experiment because it is a creative outlet or because the goal is not of monetary value? I really can’t say for sure. What I do know is that Scrum practices in real life exists (i.e. Kanban bay windows, Agile snow days, etc.), and I think noticing these real-world examples can help help our new-ways-of-working teams better apply Scrum practices in our modern work environments.